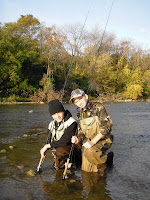 The weekend bordered on SUCKY! Actually, the weather sucked. The lack of rain sucked....and this whole fall run is shaping up to suck. BUT Wait.....there is a slim chance of Rain in the forecast.
We had some Family friends that came up for the run. Well actually, they came up to spend some time with us and we did a little fishing. Honestly it was a very little fishing. We went out early on Saturday. The weather was perfect but the flows......well.....they weren't. We hooked a couple and I broke off landing a large hen a little after sunrise. We fished the Milwaukee, we were the only ones there until 715ish. KT had a football game in the am, so I needed to 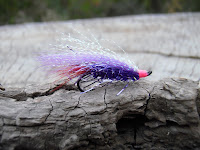 get off the water around 9am. We drove to Brookfield to see the Burlington Spiders beat the Brookfield Lancers.

After that we went to the Salmon Unlimited open house in Racine at the Root! Great program and well run. My Kudos to the salmon unlimited folks for doing a great job. They had a fly casting area, a cast area, they were giving tours of the weir and had some information boths set up. Not only that...but they had Salmon soup, smoked salmon and hot dogs! It was a great afternoon.
We went upriver to see if any of the processed kings would venture up.....
Well it was a good idea. At least, we got to spend some time together with what little water is in the Root. 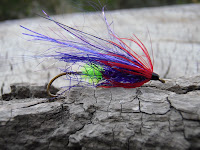 Only one Salmon made it up to us.......We had pity on it and let it rest in the pool next to us. They've moved 91 Kings upriver this weekend. Not what I would call a "Banner" Fall run!

While waiting for the fish to show up, I did get an opportunity to snap some new photos. Here's some new pattern's www.FlyFishNation.com is selling. Check out these beauties.

We were out Sunday morning again and caught some kings early. They're in the deeper runs....which really aren't that deep. Look for them to be near the riffles and in the current.
Don't throw big!!!
We've thrown them everything and the best has been to find the Alpha pair (the salmon that are actually doing the motions) and throw to the Beta fish below them. Use size 7mm naked eggs. On the Milwaukee the color of choice was a red and orange. 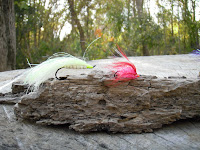 The fishing is best right at sunrise. Unfortunately there's not a lot of time to get settled so you need to be in the water with plenty of time to spare. Look for the fish and target the Betas. If you can't find any look for the deeper runs and fish your egg patterns deep. The fishing will be good until the sun hits the water. It's like the scene in Raider's of the Lost Ark, when Indiana Jones is in the temple with the staff of Ra. The sunrise goes over the city model......well imagine that scene only the sun is peaking over the tree tops and the sun light is shining on the water. Today the sunlight hit the water about 2hours and 15 minutes after sunrise. As soon as the sunlight touched the area the salmon were holding in......POOF! The fish pulled a Houdini and finished.

We had BIG AL out today. He was a Dutton guide this morning. Al landed a nice male. Note the time of morning....early. We still had to have the flash on the Camera. Great looking fish, and it was a good fight for him. It's his first Salmon. One more weekend down........
http://www.flyfishnation.com/ 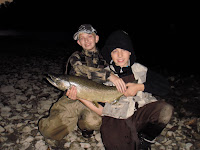 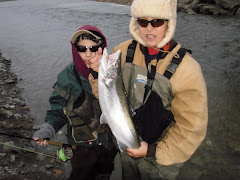 FAT
AKA as the Fishin Fatman. This is fun getting back to the flyfishing world. I've had to take a small vacation from flyfishing. My current role as a global Director has me traveling the world: Europe, Asia, South America.......it's crazy!! I've had no time to fish.
My New Year's Resolution is to Fish More........Travel Less!
Look to see me, Chief and Duke flyin' a local river near you soon.
The plan this year.....
ICE, ICE BABY - Wisconsin, Minnesota and North Dakota
Steelheading in WI and MI
Trouting in Arkansas, MO, Iowa and of course WI
WE ARE MUSKIE fishing this Summer!!
The Dog Days of August we are headed north -
ALASKA!
Salmon on the big lake, in the MI and WI tribs
We are headed to Sault St. Marie again!!!
Steelies in OH and PA. 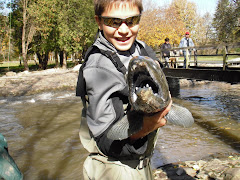